OPPO is one of the prime mobile manufacturers and distributors has launched a new device in its RENO series on 14 July 2021. If you are mad about selfies just like me or vlogger or love making videos or require anything with a good camera, OPPO RENO6 PRO 5G is for you. One of the affordable devices in mid-range pricing by OPPO with an amazing camera feature that also provides you bokeh background which works best while clicking professional photos or video recording. Now you do not require a DSLR or expensive camera set to click LIT pictures, OPPO always amazes its customers with mind-blowing cameras and its mobile performance.

OPPO is a china based company had captured the nerve of Indian by offering gadgets in all price ranges without compromising on its features. OPPO RENO6 PRO 5G price at Rs 39,990(may differ with websites and offers) with two different color options, STELLAR BLACK, and AURORA.

LET’S GET INTO DETAILS OF OPPO RENO6 PRO 5G

APPEARANCE – OPPO never fails to impress with looks and elegant design, which looks cool and attractive to carry on. It adds a classic look to your personality. It’s a premium phone with a slim design and super light in weight, easy to carry, and elegant in looks. It might look similar to the last version of RENO, which is RENO 5PRO 5G but has differences in feel. The back of the phone gives the vibes of a brand new iPhone because of the matte glass design of RENO GLOW, which reflects different colors according to lighting which gives it a stunning appearance.

Other than looks OPPO RENO6 PRO 5G has a seamless finish with a curvy screen thickness of 7.6 mm and weight 177g and flat on the top and bottom of the device. The designing of the OPPO RENO’ S serial is unique in looks, if you want your device to stand out from the crowd then you must get OPPO RENO6 PRO 5G for you.

OPPO has used AG glass for building BACK, for ultra protection Gorilla glass v5 is used to cover the whole screen. OPPO RENO6 PRO 5G works perfectly fine under pressure, does not heat as diverse cooling solutions are incorporated in the device until you reach the higher limits of the CPU and the screen does not flex in maximum usage.

On the side, you will only find volume buttons and a power button with a green tinge, at the bottom of the device you will get a SIM tray with insertion of two nano sim chips, USB type -c port, mic, and speaker grill. On the top, you will get a noise-canceling microphone. No special place for a headphone jack but you do receive a USB TYPE C headset.

Talking about its display, the screen is spread towards the sides which gives a premium look to the phone and wide screens are best to work on and enjoy your favorite shows. The screen size of the RENO6 is around 6.5 inches with full HD and AMOLED panel with 90 Hz refreshing rate and 800 nits brightness. The video viewing experience is really good with great viewing angles, especially with curved screens. The selfie camera is placed on the top left side of the screen as a small hole and the screen covers almost 91.2% of the phone frame and side bezels are non-existent.It feels amazing to see the display flowing from left to right. Every text or screen color, the display is sharp and clear, touch works smoothly, and responds extremely fast because of 180 Hz touch sampling rates. After all these features and pros, OPPO RENO6 PRO 5G does not support HDR media or videos from the OTT platform, which can be heartbreaking for binge-watchers, though devices support HDR 10+..

With the few same features as RENO5, the device has all the sensors which include an in-display finger scanner, face unlocks, and an option of the always-on display to check notification as soon as you receive.

SOFTWARE- OPPO RENO6 PRO 5G comes with DIMENSITY 1200 SoC, which is based on the 6Nm fabrication technology. OPPO RENO6 PRO 5G has only one variant of 12GB RAM and massive space or memory of 256GB unexpandable RAM but it has virtual RAM which can expand the RAM upto 263GB.

The device comes with UFS 3.1 storage type and LPDDR4X RAM type. Specifying OS and UI RENO6 PRO has ColorOS 11.3 based on android 11 with June’s security patch. This time OPPO has its CPU more powerful with ARM CORTEX – A78 cores which have enhanced the performance of GPU. Even with super powerful software, the phone doesn’t support games like BGMI and Call of duty at max graphics, if you want to play these games you will have to lower the quality of the graphics to  HDor lower, and also RENO6 PRO does not support downloading of 4K UHD texture packs. One of the best things is that you can remove all spammy and OPPOs original applications like theme stores which are pre-install applications on the device.

If you die heart fan of gaming and hate interruption like notifications while playing then you can switch on GAME FOCUS that will hide all notifications and alert while you play,  you can also take a freeform screenshot which gives you more control on the device and has a  lot of features which can be customized according to your useability. This device is truly user-friendly as it gives major control to the user to select the type of feature he/she wants.

PERFORMANCE –  The combination of Dimensity 1200SoC along with ColorOs feels really smooth and UI work responsively. Dimensity 1200 is a flagship SoC and you can play BGMI on high settings without a drop in frame. Overall the performance of the phone justify its price. This device has 5G (DSDS) that allows the use of two 5G SIMs together,  WiFi6, Bluetooth 5.2, WiFi calling, Dual 4G VoLTE & NFC that include all sorts of connectivity to the device which is also a great feature . It also has a 360 degree light sensor that adjusts the brightness depending on the environment and saves battery accordingly.

CAMERAS– This is being advertised as the camera phone which can replace DSLR because if it’s BOKEH flare feature, which is usually seen in DSLR. Cameras are the best part of OPPO, this device captures every detail as it is.

It has a 64 MP+ 8MP+2MP+2 MP quad camera setup which looks triple, but has a camera sensor below the LED flash.

4 at back camera setup with one in front which is similar to the last set of the series.

Main or Primary camera is 64 megapixel with an f/1.7 aperture, 8MP is for wide angle and 2 micro camera of 2MP. In the front of the  device, a selfie shooter of 32MP. For videos in best quality, it has Bokeh flair portrait video mode for smooth and colorful background and video looks better. It also has different  SOLOOP templates for trending short videos and AI Highlight mode is also included as features in camera.

Under mid-range budget phones OPPO RENO6 PRO has its competitors which have the same features and design, not only with other brands but also with its RENO previous version. 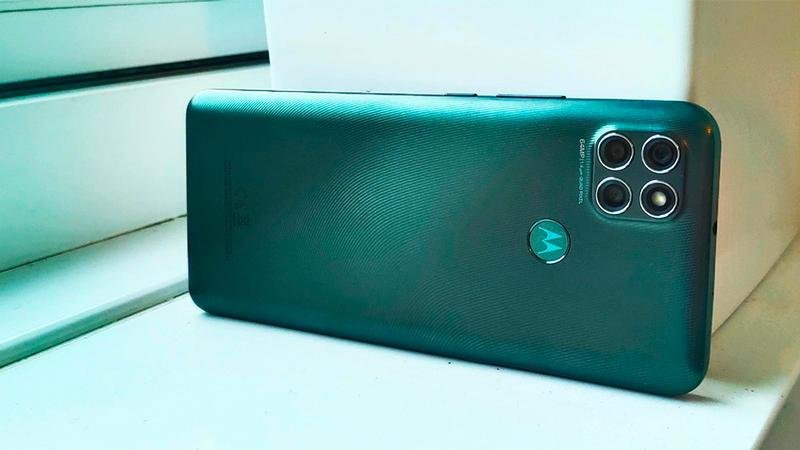 Motorola was an American multinational telecommunications company based in Schaumburg, Illinois, United States. This company split into two independent public companies, Motorola Mobility and Motorola Solutions on January 4, 2011. The Motorola company designed and sold the wireless equipment. Motorola moto G9 power is one of the electronic devices which is designed by Motorola.   Moto […]