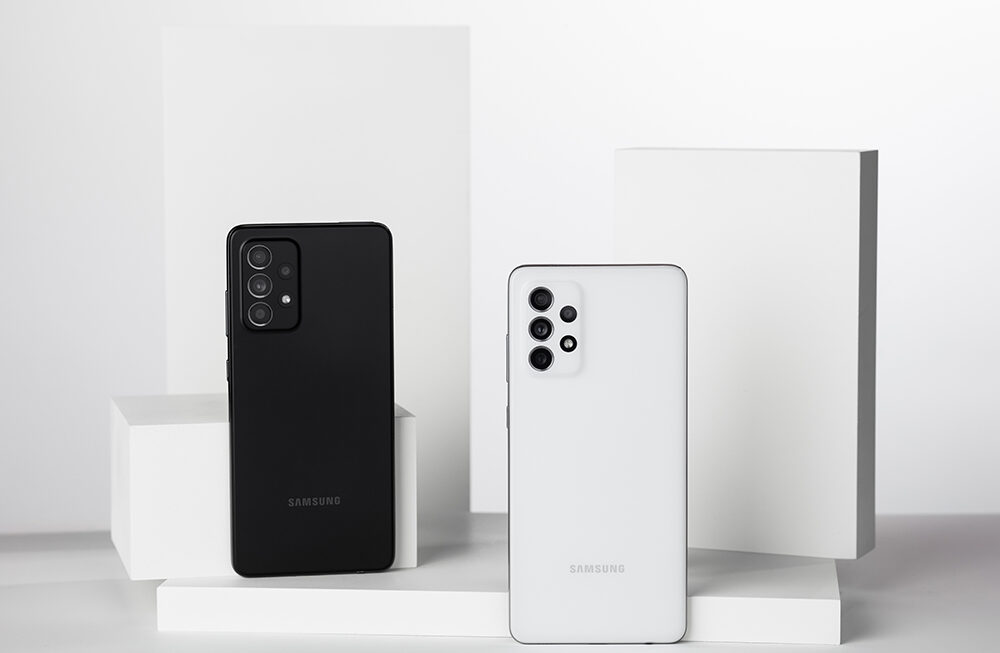 In the 90s, people didn’t have cellphone calls, they only used telegraph or landline, even those that not everyone could afford. But now that people have mobile phones, even in class, students without laptops or desktop computers can also use mobile phones to study. They can read the news and learn online, they can talk to the people they like anytime and anywhere, and they can think of the digital world from their mobile phones.

Before proceeding, it is necessary to understand that this phone has two variants. One has 4G connectivity and the other has 5G connectivity. This article specifically introduces the standard Galaxy A52 that lacks 5G connectivity. That being said, these two phones are the same thing, except for the chipset and cellular connection. Although the Galaxy A52 5G is powered by Qualcomm’s Snapdragon 750G, its 4G version is equipped with a Snapdragon 720G. In addition to supporting 5G, 750G is a relatively more powerful chip.

Samsung has eliminated the L-shaped design commonly used in the company’s 2020 mid-range mobile phone series. On the contrary, the camera layout on the A52 is deeply inspired by the Galaxy S21 series, with its obvious beaded sensor design.

The camera bump is very small, although the lens itself is not so prominent. Another design improvement is the inclusion of IP67 dust/water resistance. This is rare in Samsungs non-flagship phones, and we can only hope that the company can maintain this tradition in future devices. Galaxy A52 is available in four colors: awesome black, blue, white, and purple, all of which maintain a soft look.

On the screen, this is a 6.5-inch FHD + Super AMOLED Infinity-O screen. Protected by Corning’s, the fifth generation of Gorilla Glass. But most importantly, the company has increased the renewal rate from 60Hz to 90Hz. It is worth mentioning that the newly launched Galaxy A32 4G is Samsung’s first non-flagship mobile phone with a high level of refresh rate; however, it did not use the Variable refresh rate (VRR) process, which means that the display does not drastically change the renewal rate.

In terms of refreshment of screen content. In addition, Samsung has also received an SGS certificate of comfort which has reduced the emission of blue light. You can even set a time to use it automatically. In hindsight, the Galaxy A52 has a low-light HBM (high light mode) of up to 800 nits. It also has different AMOLED features, such as regular display and in-display fingerprint sensors. Unlike the ultrasonic reader in Samsung’s advanced phone, the A52 is equipped with a standard fingerprint sensor.

In terms of performance, Samsung chose Qualcomm’s Snapdragon 720G here. This is a health update to the infamous overuse of Exynos 9611 in the Galaxy A51, but considering the competition, it is far from the ideal chipset in this premium phone. It is an 8nm chipset that can be used in mid-range phones such as Redmi Note 9 Pro Max.

In any case, you can choose between 4, 6, or 8 GB of LPDDR4X RAM and 128 or 256 GB of internal storage. You can also use a micro SD card to expand the storage to 1TB. The running program is the latest Samsung 3.1 UI based on Android 11. On this basis, Samsung promised to provide 3 years of operating system and 4 years of security updates for its smartphones. With this, the new Galaxy A52 can receive up to Android 14 (or Google eventually called it) operating system updates.

As I mentioned before, this phone has a quad-camera setup on the back. The 48MP main camera of the A51 has been replaced by a 64MP sensor, while the rest of the settings remain unchanged. You will get a 12MP ultra-wide-angle camera with a 123º field of view (FOV), 5MP macro, and 5MP depth sensor.

Unlike the new Galaxy A72, which is also equipped with a telephoto lens, the A52 has a digital zoom of up to 10 times. In addition, Samsung has also added OIS to the rear camera. Therefore, you can record stable video at 4K/30fps by activating the Super Stable” mode. Speaking of video, there is no 60fps option at any resolution, and you can shoot a 4K video from an ultra-wide-angle lens at the expense of OIS.

The device has a good 4500mAh battery that supports 25W fast charging. Fortunately, you will get a power adapter in the box, but only a 15W unit. Samsung claims that the battery life of this matter is as long as two days, but we doubt it. The A52 also has Dolby Atmos-certified stereo speakers, making it a reliable device for content consumption. Unsurprisingly, it also has Samsung Knox security features.

These are attractive specifications that people want to check and attract text phones, and they can also change their phones.

Equipped with Samsung One UI 3.1 on the top.

Reviews of Samsung Galaxy A52:–

The matte plastic cover on the back of the phone is the first sign of this cheaper model. For many years, Samsung has used glass in its flagship product line, so you can assume that the plastic back gives the Galaxy A52 a cheap feel. What I want to say is that most people don’t notice the plastic here at all, and it protects the phone from the kind of drop that glass phones usually break.

Although I must admit, I did not throw away my phone during this review. Under the hood, Samsung chose the Qualcomm Snapdragon 720G processor (or the 750G chip in the 5G model). Although this is a step slower than the S20 series of processors, it certainly does not have a significant impact on the daytime-daily use of the phone.

The added benefit of this combination of low-resolution screen and processor selection is the long battery life. Regardless of the size of the battery inside the phone, many flagship phones of all manufacturers have a battery life of one day. The A52 has a large 4,500 mAh battery, but these key components that consume power are not very demanding. During our review of the A52 4G variant, we usually enjoy two days of charging time. The phone also includes 25W fast charging, so you can quickly charge before you get homeless. However, it does not support wireless charging.

Don’t be fooled by the price-Samsung A52 is a relatively low-priced phone. You will get some of the best parts of the Galaxy S series, and the missing features are not what most people will miss.

Compare between Samsung Galaxy A52 with other phones of Samsung:–

Comparing the mobile phones below:–

These are the comparing table so people can easily compare between their phones and can remove their confusion.

The review of cheaper smartphones used to be much easier, because there are always shortcuts and trade-offs that make it easy for us to find faults when using them. For A52, it is difficult to determine the part of the experience that did not meet our expectations. But as I mentioned earlier, this is part of the pattern we see in phones in this price range, such as the Google Pixel 4a. We should stop expecting these mid-range phones to be disappointing and accept the fact that the cheapest phones are the best for most people. The Samsung Galaxy A52 has a large and vivid display that can cope with daily smartphone tasks and several days of battery life. This is an easy-to-recommend mobile phone.